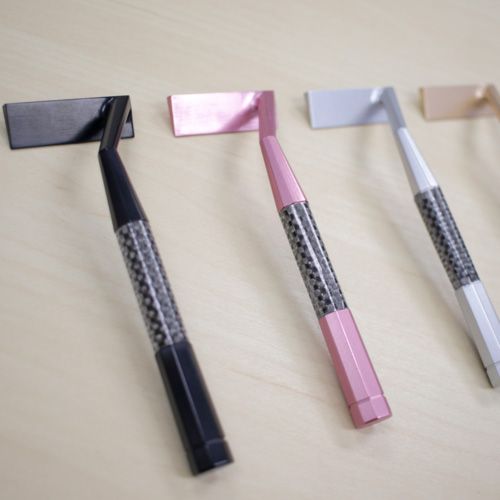 Introducing the Skarp technology. The Skarp razor uses a patented technology, which uses laser tissue interaction to do the cutting rather than relying on a mechanical blade. To be certain, ideas for laser shaving have been around since the 1970's. Many companies have spent significant time, energy and $10's of millions developing laser razors over the past decades. The problem with using laser technology so far has been in the use of the open laser beam to cut the hair. It is much more difficult to exercise control with an open laser-beam and navigate the bumpy terrain of a shave with an unbendable beam.

Skarp introduces the paradigm shift of using a special optical fiber to contain the light until the hair itself comes close to that fiber. It is then, upon contact with the optical fiber, that light jumps from the fiber into the hair by the principle of frustrated total-internal-reflection. The special fiber itself is like a blade with light doing the cutting using a thermal process rather than using mechanical force.

Skarp razor shave in the shower, but it doesn't require water. It shaves dry with the same ease.

The advantages of the Skarp razor for desert military personnel or in emerging markets where access to water is scarce, or where infectious disease transmitted by razor cuts and scratches makes shaving a hazardous activity, are obvious. The Skarp laser light is also self-disinfecting. Green. Skarp is the only modern razor that doesn't use consumable materials. No toxic waste-line or garbage fills. No CO2 foot-print.

Skarp's safe and US sourced rechargeable battery may also be powered by solar panels, an additional advantage in situations and areas with limited access to the power grid. As mentioned rural areas, emerging markets and military deployment situations. It's place in space travel has already been suggested by Hollywood.

In addition to the IP, Skarp has performed a proof-of-principle of the operation and is now working on improving this operation by way of constructing a tangible, product-like beta unit that will allow users to shave without sacrificing comfort and with a substantial reduction or complete eradication of skin damage or irritation.